Stallone memorabilia up for auction

If you’d like to own Rocky Balboa’s boxing gloves or John Rambo’s army jacket, you’re in luck. Sylvester Stallone is making iconic items from his films available to fans at an upcoming auction.

Actor, writer and director Sylvester Stallone will offer fans a chance to bid on more than a thousand costumes and props from his famous action films, including the Rocky, Rambo, and Expendables franchises. A portion of the proceeds from the auction, to be conducted by Heritage Auctions, will be donated to charities and organizations that assist veterans and wounded United States servicemen and servicewomen.

“I thought other people would really appreciate the memorabilia. So, rather than keep it all in storage I thought I should just pass everything on,” Stallone said. There will be public exhibits of selected items in Dallas, New York, Los Angeles, London, Berlin and Hong Kong this summer and early fall. The auction will be held live and online by Heritage in Los Angeles on October 14 and 15, 2015.

Among the items that will be offered are: 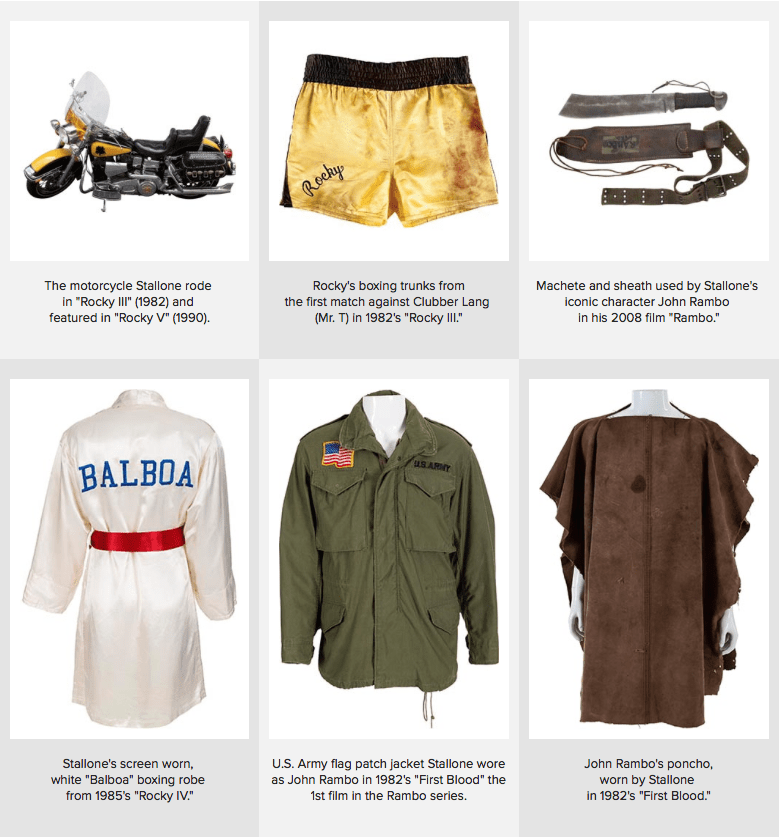 Public previews of all the auction items will be at the Hyatt Regency Century Plaza in Los Angeles, October 12 – 14, with the auction conducted there on October 14 and 15.

Find out more, and watch a fantastic video of Sly trying on items, at the Heritage Auctions website.

What would you like to have in your collection? Let us know in the comments.