From his recent posts on Twitter, it’s clear that Sylvester Stallone is having fun with The Expendables.

Sly took to the microblogging service recently to post a few updates on the tone of The Expendables 3, which he is currently developing, along with a few thoughts on casting new roles.

For those wondering what will follow his recent action thriller Bullet to the Head, Stallone will next be seen in Escape Plan (formerly The Tomb) opposite Expendables co-star Arnold Schwarzenegger, which hits cinemas on September 13, 2013. After that, you can expect to see Sly in the boxing comedy Grudge Match with Robert De Niro, which should debut early next year. 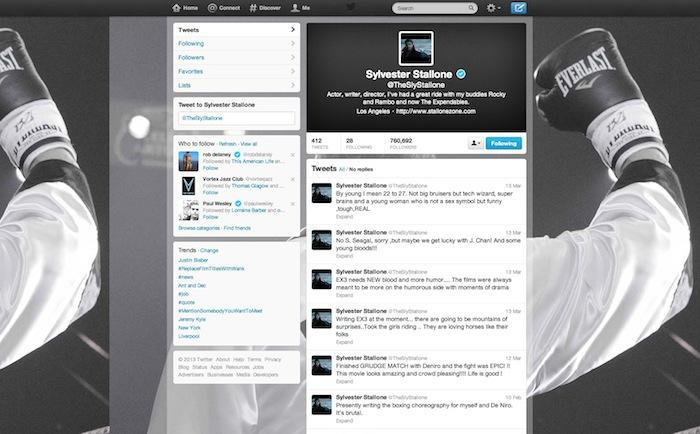 So, back to Sly’s posts on Twitter. It all started out innocently enough with this status update:

Writing EX3 at the moment… there are going to be mountains of surprises..Took the girls riding .. They are loving horses like their folks

He then began to talk about the general tone of the second sequel:

EX3 needs NEW blood and more humor…. The films were always meant to be more on the humorous side with moments of drama

As the fans got more and more excited, Sly began to tease more details about the casting of the film, hinting at the possibility of more ‘young blood’ in the picture:

No S. Seagal, sorry ,but maybe we get lucky with J. Chan! And some young bloods!!!

He clarified his thoughts on this with one final tweet:

By young I mean 22 to 27. Not big bruisers but tech wizard, super brains and a young woman who is not a sex symbol but funny ,tough,REAL

Exciting stuff, we’re sure you’ll agree, and with Sly on our screens more than ever these days it’s a great time to be a Stallone fan.

Are you looking forward to the third instalment of The Expendables? Let us know your thoughts in the comments below.