On the set of The Tomb

Entertainment Tonight recently posted a video from their set visit to The Tomb.

In this video, Stallone and Schwarzenegger talk about their characters in The Tomb; their work together on the action blockbuster The Expendables and its forthcoming sequel The Expendables 2; and the old-school machismo of action movie stars, which Sly calls, ‘male pattern badness’. Check out the first images from the set of this exciting new movie, and let us know your thoughts in the comments.

In The Tomb, which is due for release in 2013 (no pun intended), Sly plays the world’s foremost authority on structural security for high-security prisons who suddenly finds himself faced with escaping from the master prison of his own design.

‘The funny thing is we have tried, I think, our entire careers to always work together’, says Arnold. ‘We have talked about it for three decades and it never happened. I think we tried maybe too hard. … But now after the governorship, somehow this just fell into place.’ 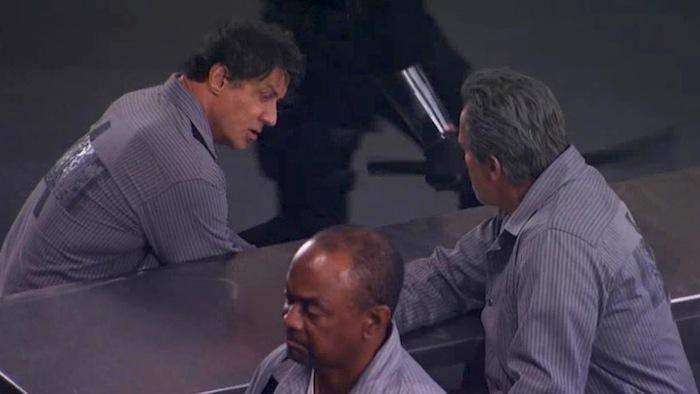 ‘This genre unfortunately is becoming… let’s just say it’s fading away’, says Sly. ‘You have the superheroes today which are possessed with all extraordinary powers; they can blink and a fireball comes out of there. It’s great. And then you have a bunch of us which is just your basic male-pattern badness.’

Excited about this project? Let us know in the comments below!